Monday 9th of March 2015 will go down in enterprise education history as the day CBBC were forced to take down a children’s quiz portraying entrepreneurs as cheating, sneaky and, above all, immoral people.

Entitled “Are you an Entrepreneur?” the quiz naturally attracted the attention of Clever Tykes co-founder Ben Cook during his weekly quiz revision (searching for the Newsround ‘quiz of the week!’). Clever Tykes posted the quiz to Facebook on Friday 6th of March and you can see our original post here. After the post was seen by a number of enterprise educators, it wasn’t long before a Twitter storm ensued with a number of prominent business figures wading into the bog of war on Monday 9th. Within 24 hours, the CBBC entrepreneur quiz had been taken down and a statement was issued by the BBC. But why such the backlash and what did the BBC have to say for themselves? Co-founder Ben Cook explains…

Arguably, it would have been nice for everyone to actually complete the CBBC entrepreneur quiz themselves since, I tweeted, it had to be taken to be believed. The quiz’s format was incredibly straightforward and followed a similar structure for eight questions:

Q: You find yourself in a situation, do you…

a) Do the right thing

b) Do something questionable

c) Be immoral in order to make personal gain

You scored a mark for picking the sneaky, immoral, selfish or greedy answer. Being honest got you nowhere.

Abe with his magic juice/poison

At the end of the quiz you received your marks out of eight. Full marks meant you were the ‘shark in the tank’ (what does that even mean?) whilst getting none or only a couple of marks meant you were ‘too nice to be an entrepreneur’. I actually scored 1 out of 8, which I think makes me a saintly opportunist. Regardless, this scoring system was annoying. After Enterprising Child author Lorraine Allman found out about the quiz, she was taking no prisoners and quickly drafted in the help of Apprentice firee Felipe to promote the story. 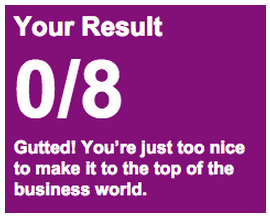 Too nice. Quit now you weak, innocent child; you’ll never amount to anything

As the Twitter campaign, using the hashtag #cbbcquiz, gained momentum, Nick Hewer retweeted a tweet and some other entrepreneurial people in the public eye did things too. Eventually, as pressure built (including a call with the BBC’s head of digital, which only Clever Tykes knew about because we made it) CBBC removed the quiz, much to the delight of the enterprise community. CBBC, however, managed to leave the biography of the quiz’s fictional creator ‘Abe Watson’. Now, our fictional friend Abe also has a fictional company called Abe Watson Industries and he also won a fiction competition; ‘Young Businessperson of the Year’. Just to stick the knife in a little further, the witty ‘creatives’ at the BBC made sure to tell their impressionable audience of 7 -12 year olds that Abe Watson Industries had, in fact, sponsored the award Abe Watson had won. Where do they find their talent? They have now, managed to take the whole page down. 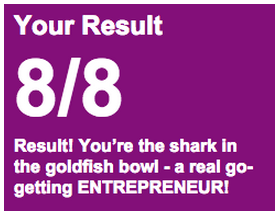 Well done, you shark, you. You’ll be a great entrepreneur if you manage to stay out of prison.

Anyway, by the end of the day CBBC had issued a statement, having ignored all the tweets. It went something like this:

“The quiz was intended to reflect a fictional character from the drama ‘Eve’. In the programme the character has a mischievous and deceptive nature and this was incorporated into the quiz outcomes.

“On reflection we accept that when taken out of context the quiz could be seen to be condoning immoral behaviour which was certainly not our intention.”

Now, I love the BBC as much as the next person but I would like to know what context that this quiz was taken out of. Granted, Abe Watson is a fictional character who is meant to be a thieving entrepreneur (nothing new there!) but the quiz is in REAL LIFE. That is, a real life quiz taken by real life children. How do we take real life out of context?! I’d love to take real life out of context and make it not-real life sometimes. I’d love to take Aston Villa’s underperforming team out of the context of real life and have them winning the Champion’s League every year because they’re playing against teams of ants (real-life-sized ants). Digressing here.

I don’t know how long that quiz was up there for but I revise for a local pub quiz every week (not sad – committed) and I know the title of the this CBBC entrepreneur quiz would have attracted my attention. But, the ‘casting call’ from which the character Abe Watson was derived was posted on Firefly Arts’s Facebook page over a year ago. There was no hint of apology from the BBC, which is disappointing since there are hundreds of enterprise educators like Lorraine and ourselves who are trying desperately hard to improve the perceptions of entrepreneurs and businesspeople as well as showing children the world of opportunities out there for them.

If only there were some positive entrepreneurial role models out there who could inspire children to be more enterprising whilst promoting important traits like resourcefulness, independence, honesty and integrity…