Tommie Rose became just about the UK’s most (in)famous entrepreneur last week with the breaking news that he’d amassed some £14,000 by selling sweets at Buile Hill High School in Salford before being promptly suspended. Naturally, this caught the eye of the Clever Tykes teams as more established entrepreneurs waded in to offer their support before Rose began making headlines again by listing signed soft drink bottles on eBay. Whist some applauded the schoolboy’s efforts, many were unhappy at the nature of his venture and, in time, he is likely to go down on the list of opportunists who, ultimately, exploited those around them for profit. We think Change-it Cho would have some very strong words for Tommie!

What if there was a simple way you could improve the health of your children? What if you could simply read stories with them and inspire their future academic and professional achievements? Clever Tykes, a new company from the UK has developed a children’s storybook fusing healthy eating and enterprising behaviour to revolutionise the way entrepreneurs are created. 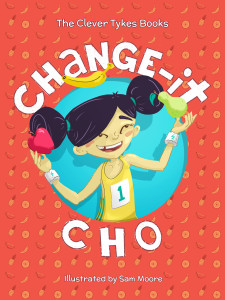 Change-it Cho, a third of The Clever Tykes series, is a positive entrepreneurial role model who stimulates children’s habits on and the benefits of healthy eating. Cho doesn’t have it all her own way and encounters obstacles, however, it is her determination and drive that helps her along the way. It is certainly an alternative story of that of Tommie Rose!

“Children have some great fictional role models in traditional jobs like Postman Pat, Fireman Sam and Bob the Builder, now Clever Tykes is painting a better picture of businesspeople rather than Mr Burns, Ebenezer Scrooge and Lord Business from the Lego movie!” says founder Ben Cook.

There is a strong link between children who have businesspeople parents starting their own business, now Clever Tykes is offering the opportunity for every child to have an entrepreneurial role model. The stories promote key life skills like resourcefulness, resilience, innovation and determination and will help children aspire to more both academically and professionally.

The Birmingham-based business is making waves in the primary enterprise education sector and it seems only a matter of time before parents are flocking to get their hands on the series to give their children the best start in life.

Having already been sponsored by NatWest to pioneer primary enterprise in the classroom along with teaching resources, Clever Tykes is now launching its series of storybooks to the public this Christmas to give every parent in the UK the opportunity to get their hands on the revolutionary series. You can find out more about the project at www.clevertykes.com and you can buy the series for any children who you want to give a kick-start in life!

The company started in 2012 with the sole purpose of promoting enterprising behaviour after it was realised that there was a direct link between an entrepreneurial upbringing and the likelihood of starting a business later in life.

Having been included in Lord Young’s recent Government report and received high praise from the Minister for Education, Clever Tykes has secured a pilot with a major high street bank to deliver branded books and teaching resources into local schools. The series helps children with the worst upbringings the very most and become a key driver for social mobility in the UK.

With a strong start, Clever Tykes continues to work towards the aim of reaching all 17,000 primary schools and to inspire over 4million young people in the UK.

The books are suitable for 6-9 year olds and used across Key Stage 2 by primary schools.