28 Apr Should we slate successful people and celebrities?

Posted at 13:27h in Blog, Social Mobility by Clever Tykes

We’re all well aware of the celebrity culture we’ve developed in the UK; ‘culture’ regularly being poetically chosen over ‘obsession’. Our obsession with these individuals creates demand for TV, magazine and website coverage of related stories with varying combinations of truth and fabrication. Whilst there’s nothing inherently wrong with this coverage (although much of it is negative and elicits negative comments and responses by viewers/readers) the impact of belittling people in the public eye in front of our children may have prolonged negative implications.

Remember that as a child that everything you were told by your parents was gospel. If TV show ‘A’ was good, it was good. If ‘celebrity B’ was an idiot, they were an idiot. If ‘supermarket C’ was the best value, it was the best value. How individuals in the public eye are described by parents heavily influences children’s opinions; not just of that individual but of what they’ve done and others like them. Now, not every famous person is famous because they’re successful and not every successful person becomes famous (many try to avoid fame) but there is a crossover and it’s the individuals in this crossover which are the most important people to us in this instance. 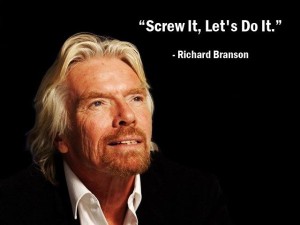 It’s all too easy to find ourselves making excuses for other people’s success. It’s almost as if we have to ensure ourselves that had we enjoyed their favourable circumstances, we would have achieved the same.

Common excuses we make for others’ success:

Of course, putting success purely down to circumstance or luck sets a dangerous precedent – we neglect the need for hard work, passion and developing skills.

But what about if someone famous tries and fails at a venture? Chastising people’s efforts and mistakes in front of a child is one of the worst things we can do.

Children already get a tough time of it when it comes to making mistakes and trying new things at school. Most schools need children to achieve certain things and achieve them in a certain way; anything other than this is seen as failure and mistakes are generally punished. Children need all the encouragement in the world to try new things and not worry about making mistakes and certainly not worry about being successful! Ridiculing anyone who fits any of these criteria is going to make children shy away from anything out of the norm and this might really affect their development and life chances.

Laughing at what a successful actor has tried to achieve with a new business or belittling them for ‘wanting even more money’ is very dangerous, particularly as that person is probably trying to secure income for later in their life. What message is this giving to a young child? What about telling them that someone like Richard Branson is greedy when, in fact, Sir Richard has created thousands of jobs and has added value to virtually everyone in the UK having started from absolutely zero. I’m not even a massive Branson fan, but he’s a prime example of someone who gets stick when every child should learn lots from his ethos and endeavours.

Always be positive. Positivity is contagious and all we’re trying to do is create an environment which empowers children to follow their passions and be ambitious. It’s no surprise that Branson’s nickname at Virgin is Dr Yes! Everything’s possible and anyone can achieve it.

Celebrate mistakes and ask children what they could learn and do differently next time. It doesn’t need to be their own mistake – it could be characters on TV or real people in magazines.

Avoid politics. None of this has to be political. It’s very easy to start going on about right and left wing politics and bashing politicians, but it’s not about labelling ourselves by our political beliefs – it’s about everyone believing they can follow their dreams and their path is not determined.

Promote all career choices. Guess what? A child will grow up to either a) work for themselves b) work for a business c) work for the government or d) be part of the government (if they’re willing and able to work). So which is best and which should be promoted? There is no right answer so it’s important that all avenues are portrayed positively and are accessible for everyone.

Celebrity culture and success-bashing, whatever role that plays in our adult lives, should not affect the outlook of developing children and young adults. Always try to see the good in people and what they do and help others around you portray successful people positively to children – it might really help them aspire to become whatever they want to be.